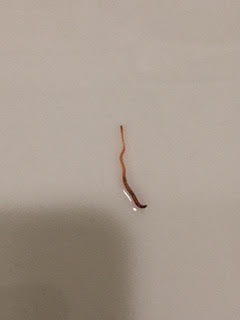 Canadian Worms Can Take A Shower Too

One of our Canadian readers’ two-year-old son and her husband had just finished up a shower when they found this worm in the tub. They’d had a shallow bath at one point, after which her husband had taken the shower head down and thoroughly sprayed down the tub, walls, etc. and there was nothing in the tub at that point. After they were done and ready to get out, this was crawling in the bottom of the tub at the opposite end from the drain.
From what we’re provided, it appears to be an annelid, perhaps a bloodworm but likely an earthworm that rode in on one of the bathers or perhaps found its way into the tub when Dad pulled the shower head out of the wall mount to spray the surround clean. 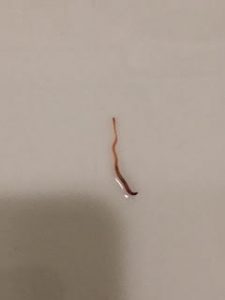 Worm in the Shower

No object or measurement has been included to determine scale but we will estimate this creature is probably about three or four centimeters in length. It appears to be stretching to about two inches by a process of muscular contractions, which in annelid worms is called peristalsis, rather than curling or side-winding. The shape of the tail end could tell us more about which type of earthworm this is, but it is not clear from this image.
From the photo, we feel safe in saying that by identifying the color (purplish red, not the bright red commonly observed in bloodworms) and general shape and behavior, that this is an earthworm and likely became dislodged from some drain or crevice when the husband washed the walls and tub with an extendable shower head. Earthworms in the soil can work their way into the piping underneath the shower and crawl up through the drain, for example, and it may have been rinsed from some hiding spot.
If our reader keeps finding worms, they are likely coming into the house through some such opening. If she doesn’t find any more, then they may have come in on the hair or clothing of the child or the husband. Hopefully this interloper is the product of a great afternoon for our reader and her family in a backyard full of rich soil and vegetation, and the earthworm rode in unobserved in a pocket, pant cuff or shoe.
Our reader may feel safe in the knowledge that earthworms do not present a threat to the health of humans. Diligence in reducing excess water from walls, windowsills, and floors, will remove the attraction of moisture, which earthworms require to survive outside their primary soil or compost habitats.

Article Name
Canadian Worms Take Showers Too
Description
From what we're provided, it appears to be an annelid, perhaps a bloodworm but likely an earthworm, that rode in on one of the bathers or perhaps found its way into the tub when Dad pulled the shower head out of the wall mount to spray the surround clean.
Author
Rebecca Linnmyer
Comments: 0 Posted by: Previous Author Categories: Earthworms, Red Worms, Segmented Worms Annelida