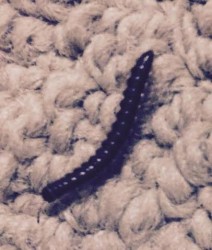 Tiny, long worms have been discovered moving slowly from this reader’s flower garden to her new, 6-year old house. The worms in question are, according to our reader, brown in color, not fuzzy, and have no legs.

Furthermore, our reader states that she never finds the worms on plants, and that they never enter her house, but are everywhere outside. In addition to this, she claims that when she tries to pick up one of the worms, it curl up in a circle. Our reader also says that the worms appear to have no legs, and yet “walk gradually” on their undersides. It is clear to us from our reader’s descriptions that the worms she has been finding are actually millipedes.

Millipedes are not actually worms, but are arthropods. Arthropods are a class of invertebrate that have hard exoskeletons protecting their segmented bodies. The common millipede, which are often found in hordes, as in the case of our reader, is minuscule in size (anywhere up to an inch), brown and glossy, and has about 160 legs. Millipedes are environmentally beneficial, meaning that they feed on decomposing organic matter and break it down into excrement which is good for the soil. In addition to this, millipedes are neither harmful, nor parasitic toward humans, contrary to popular belief. When a lot of people think of millipedes, they are actually picturing centipedes, the millipede’s bigger, poisonous ‘cousin’, if you will. Besides the two points already mentioned, the main difference between millipedes and centipedes is the placement of the legs. Millipede’s legs are situated underneath the body, and are thus seldom visible, depending on the size of the millipede. This is probably why our reader was not able to see the legs on the millipedes she found, but it looked as if they were just floating across the ground. Contrarily, a centipede’s legs extend from the sides of its body.

Despite millipedes being environmentally beneficial and harmless, it is understandable that one does not wish to find them all over their garden. They tend to pop up in people’s gardens under damp conditions, as this is the environment they most prefer. Additionally, millipedes tend to hide under leaves during the day, and mostly come out at night to roam and feed. It is good that our reader has not found any of the millipedes inside her house yet, as mass migrations of millipedes tend to occur into people’s homes during the night. While most of the time this is accidental, the millipedes simply seeking damper conditions when it gets dry outside, they are fairly common. In a home, a millipede will usually seek the damp shelter of a basement or garage. For these reasons, we recommend that our reader seals any cracks or gaps in her home that such creatures could crawl through, and that she moves any leaves or mulch away from her house to prevent millipedes from being attracted to her house, and to keep them outside. Removing organic matter from one’s garden in general is a good idea to control the number of millipedes outside, if our reader wishes to do this.

To conclude, the tiny worms our reader has been finding outside her house in her flower garden are definitely millipedes. Whilst they are nothing to fear, we understand if our reader is a bit put off by the discovery of them, and thus following the methods above should at least help in controlling the millipedes, if not reducing their numbers as well.

Article Name
Brown Worms Roaming the Flower Garden are Millipedes
Description
Tiny, long worms have been discovered moving slowly from this reader's flower garden to her new, 6-year old house. The worms in question are, according to our reader, brown in color, not fuzzy, and have no legs.
Author
Worm Researcher Anton
Share the knowledge

This many people searched for this info: 1,969