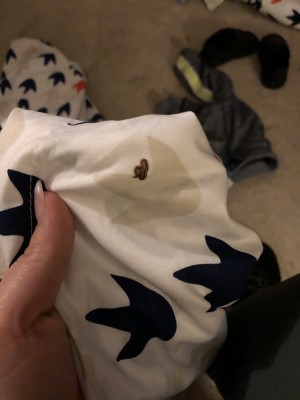 One of our readers recently reached out after discovering a couple of brown worms in her home. She explained that both were found upstairs in different bedrooms. It really freaked her out to find one in her son’s bedding, who is only 1 year old.

In the photo, we can see that the worm is a dark red/brown color. It appears to be pretty short, but she did mention that the other creature she discovered was longer. It looks like it might be segmented, but that could just be how it appears in the photo: 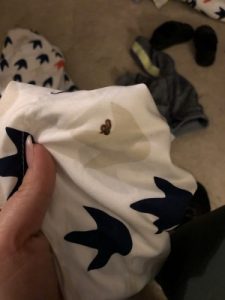 We aren’t confident about what kind of organism our reader has discovered, but we don’t think it is any of the common household pests that readers deal with. It doesn’t look anything like carpet beetle larvae or pantry moth larvae, both of which are often considered annoying and destructive pests. We can also rule out black soldier fly larvae, drain fly larvae, and inchworms. The specimen also looks too thin and long to be a caterpillar. So, if she isn’t dealing with any of the organisms listed above, then what did she find in her home?

We think she might have found earthworms. Earthworms match the color, size, and shape of the creature in the photo, and they are segmented! Also, earthworms are found in homes fairly regularly! They aren’t household pests, which means they don’t typically eat household items or breed inside a home, but they do still wander in from time to time. We will say it is surprising that she found one of the specimens in her young son’s bedding, but it could have come from an item of clothing or on a shoe. We recommend she wash the bedding, and then make efforts to seal up any small entryways into her home. Small gaps between windows, doors, and vents could be inviting doorways for earthworms, and sealing this up may prevent future worms from visiting her home.

To conclude, we think the worms our reader has discovered in her home are probably earthworms. If our reader is concerned about her son’s health or worried that the worm she found in his bed came from him, then we recommend that she take him to the doctor immediately. We don’t think it is anything dangerous, but we aren’t medical professionals and can’t weigh in on medical issues.

Article Name
Brown Worms Found Around Home Might Be Earthworms
Description
We think the worms our reader has discovered in her home are probably earthworms. If our reader is concerned about her son's health or worried that the worm she found in his bed came from him, then we recommend that she take him to the doctor immediately.
Author
Dori Franklin
Share the knowledge

This many people searched for this info: 1,329