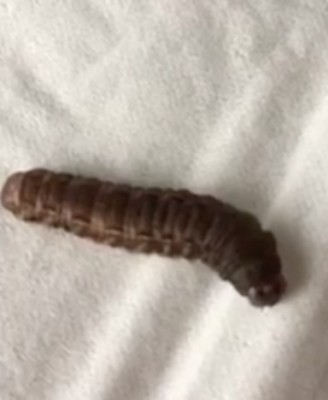 We heard from a reader who explained that “worms” have suddenly begin appearing in her kitchen. She said that despite the snow on the ground outside and cold and blustery weather, several brown worm-like organisms have been inching their way through her kitchen by her sliding glass door. She said that the door has not been open for many days, and yet they keep appearing. She has been dealing with them by flushing them down the toilet, but she would like to figure out a way to stop them from appearing in the first place. She also mentioned that her kitchen floor is laminate flooring with cement underneath. Here is a photo of the mysterious creature: 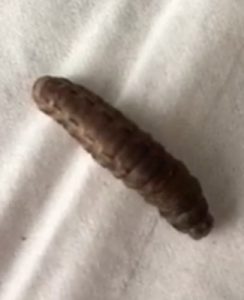 We have two ideas as to what creatures our reading has been finding in her kitchen. First, we think they may be cutworms, which are a type of caterpillar. Like most caterpillars, cutworms eat plants and are often considered pests by gardeners and farmers. Cutworms are known to chew through the stem of a plant, thus cutting it down, which is how they get their name. Cutworms can be green, yellow, brown, or grey.

However, we aren’t convinced that these are definitely cutworms. Cutworms usually spend the winter maturing underground, so it doesn’t make sense that there would be a troop of them crawling through our reader’s kitchen. This brings us to our next idea. We believe these specimens might be black soldier fly larvae.

Black soldier fly larvae, or BSFL for short, are usually associated with composting or decomposition because they are excellent at breaking down organic matters and returning nutrients to the environment. Readers sometimes discover BSFL in their outdoor compost bins, or in the trash cans in their homes. We think our reader should investigate all the trash cans in her home for signs of these larvae, especially the kitchen! If she does find evidence of them, she should not only empty the garbage out, but also clean the bin and the area around it!

In summary, a reader noticed some brown worm-like organisms in her kitchen. We think they are likely black soldier fly larvae. 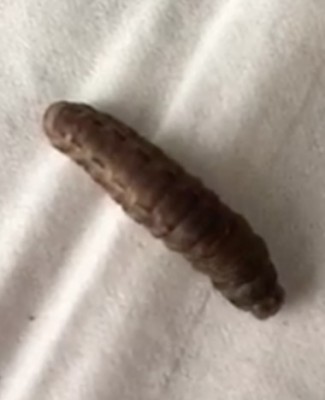