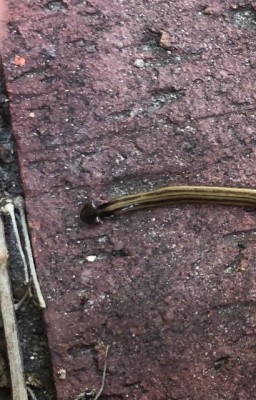 “Is this a hammerhead flatworm?” asks this reader for her friend in Southeast Texas. She is asking about the long, thin worm below, which is brown, with lighter brown stripes running the length of its body. 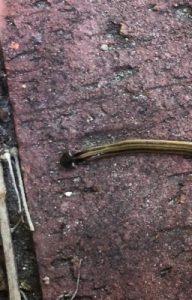 Based on the image above, we can confirm that this is indeed a hammerhead flatworm. Its spade-shaped head gives it away. So, despite not being a “worm expert”, our reader did a pretty good job of sleuthing for answers. Hammerhead worms are, in our opinion, one of the most fascinating worms. In addition to their unique appearance, they also possess a number of extraordinary abilities. Before we get into that, we will mention some facts that we think will be of interest to our reader. Firstly, hammerhead worms are not dangerous to humans. That said, they do secrete a fluid which can cause irritation or stinging to the skin, so we do not recommend touching them with bare skin. Instead, wear gardening gloves if and/when handling them, or scoop them up with a dustpan. Secondly, hammerhead worms are predators, and will eat various insects, small critters and even other hammerhead worms. Its presence in our reader’s friend’s home could indicate the presence of other bugs, so that is something she can look out for. Thirdly, because of its predatory nature, hammerhead worms thrive outside in humid environments. As such, we recommend that our reader move the worm outside. 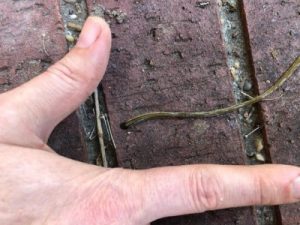 Now, for some fascinating facts concerning the flatworm. To start off with, the aforementioned fluid it can secrete, while not being that harmful to humans, is deadly toward the prey that it hunts. In actual fact, the hammerhead worms can secrete two different fluids. One of them paralyses the victim, and the other liquefies them. Following this, the hammerhead worm can extend a straw-like appendage from its face that it uses to drink up its prey. It is admittedly quite gross when put into words, but the abilities are nonetheless amazing. In addition to this, hammerhead worms are capable of tracking their prey by detecting biological signatures left behind in the air, such as varying pH levels, and they do this using sensors located on the underside of their spade-shaped heads. Finally, hammerhead worms, like most flatworms, can regenerate body parts, and seemingly without limit. What we mean by this is that if a hammerhead worm is split into two parts, one will eventually be left with two hammerhead worms. Similarly, if one splits it into eight parts, one will then get eight hammerhead worms (theoretically speaking). It does not even matter if one makes the split horizontally or vertically.

In conclusion, the worm our reader’s friend found is indeed a hammerhead worm. These creatures are not dangerous to humans per se, but they can cause mild, temporary harm to those who make them feel threatened and then touch them. Nevertheless, the hammerhead worm is an extraordinary worm, in every sense of the word, and we hope that our reader and her friend finds them as interesting as we do. We wish them the best!

Article Name
Brown Worm with Spade-shaped Head is Indeed a Hammerhead Flatworm
Description
"Is this a hammerhead flatworm?" asks this reader for her friend in Southeast Texas. She is asking about the long, thin worm below, which is brown, with lighter brown stripes running the length of its body.
Author
Worm Researcher Anton
Share the knowledge

This many people searched for this info: 639