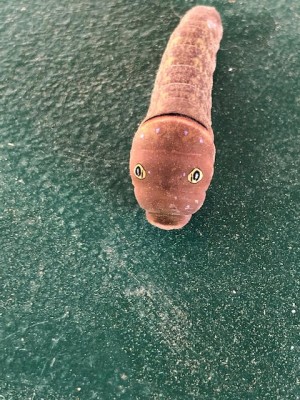 “What is this?” is all this reader writes to us about the brown caterpillar in this excellent photograph below. At the tip of this cute creature sits its voluptuous head, adorned with pink, triangular markings, as well as some cartoon-like, yellow eyespots. 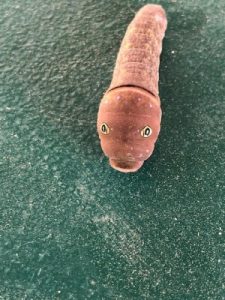 The creature we are looking at above is a Western tiger swallowtail butterfly caterpillar. This critter gets its name from belonging to the vast family of swallowtails (with over 500 species), as well as its distribution in the Western parts of North America. The adult butterfly of this swallowtail species is big, black and yellow, and beautiful to behold. With a 4-inch wingspan, this butterfly lives in canyons, woods and parks, and feeds on the nectar of various flowers. Meanwhile, the caterpillar feeds on the leaves of various plants, such as cottonwood and aspen. The most noticeable feature of this caterpillar is its two, huge eyespots, which are false. In reality, the head of the caterpillar is tucked inside his skin. It will hide its head this way when it feels threatened, kind of like a turtle retreating into its shell. Other than that, the caterpillar does not really have any defense mechanisms that we know of. It does not secrete any substances, nor does it bite or sting. That said, there are definitely other species of swallowtails (such as the Pipevine swallowtail) that are poisonous, but this is luckily not one of them.

We recommend that our reader leave this caterpillar alone, wherever he found it. These caterpillars are not invasive, nor are they considered pests of any real merit. This is partly due to the fact that the caterpillars will usually host just one plant, and will not move and ‘spread’ to other neighboring plants. As such, it makes infestations easy to control, as the caterpillars can be hand picked. Another factor to consider is that these caterpillars are “heavily parasitized” and as a result “rarely become major pests”, that is according to the Pacific Northwest’s Pest Management Handbook page on the Western tiger swallowtail. What this means is that parasites often take these caterpillars as hosts, which then curbs the rate at which their populations grow, and thus the rate at which they can infest a large area of vegetation. We suppose this is a way in which this caterpillar could potentially affect human health. Hence, we do not recommend that our reader eats the caterpillar, if he had any thoughts about doing so, as he may also ingest a parasite; this could have unforeseen consequences.

In conclusion, this cute creature that our reader found is a Western tiger swallowtail caterpillar. Its jarringly cartoonish eyes make some gawk in adoration and others wince in fear, but either way this creature is perfectly harmless (unless eaten, potentially) and should remain undisturbed. We hope this article proves enlightening to our reader and we thank him for this excellent photograph which we can add to our library!

Article Name
Brown Worm with Cartoon-like Yellow Eyespots is a Western Tiger Swallowtail Caterpillar
Description
"What is this?" is all this reader writes to us about the brown caterpillar in this excellent photograph below. At the tip of this cute creature sits its voluptuous head, adorned with pink, triangular markings, as well as some cartoon-like, yellow eyespots.
Author
Worm Researcher Anton
Comments: 0 Posted by: All About Worms Categories: Caterpillars, Garden Worms, Worms Generally