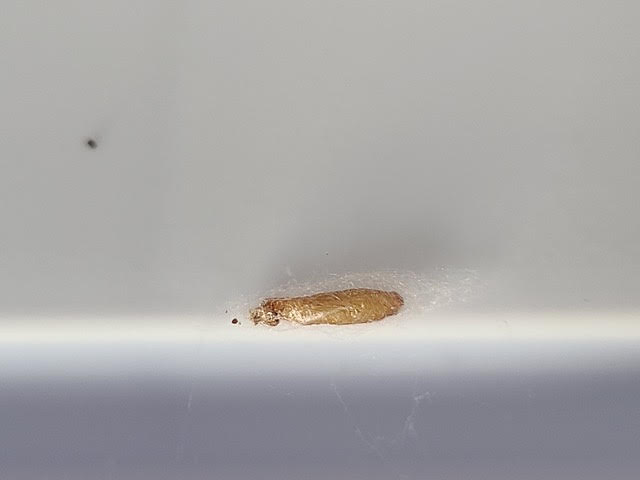 This reader writes to us after finding “worms” in her toilet paper. The worm-like creature, pictured below, appears to be brown in color, and trapped under some sort of webbing. Our reader states that she “took [this worm] outside immediately”, but has since discovered “MANY worms in [her] garage.” She continues in her submission to say that the worm was found in a “recently purchased Charmin toilet paper delivered by Shipt. It was dark when it was delivered and I put it in my garage. I noticed what looked like sawdust on the bottom, but didn’t think much of it. Two days later, I saw more “sawdust” and realized there were worms in the TP!” Additionally, the worms have also been found “on the ceiling and on many surfaces.”

“Help! Do you know what they are or how I can get rid of them? Everywhere I look there are more.” Now, we can unfortunately only speak for the organism photographed above, and not for the other worms she found on her ceiling in her garage, as those worms are not pictured. But, assuming they all look like this one, we think that these are pupae. Pupae are insects that are undergoing the second stage of their life cycle. Most insects have three basic stages: larva, pupa, adult. The pupation stage is simultaneously the most inactive and active one: inactive in the sense that the creature does not move, but stays in its shell, and active in the sense that during this stage the organism is undergoing a significant physical transformation referred to as metamorphosis. It’s what all caterpillars go through when they hide inside their chrysalis and turn into butterflies or moths. 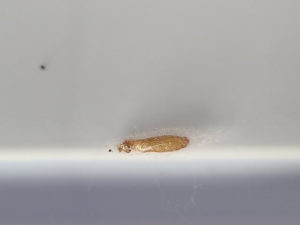 We think this creature is a pupa because of its long, ovate shape, light brown color, and smooth outer shell, which seems devoid of legs and other characteristics. Simply put, it looks like a chrysalis. Besides, the fact that it was found under webbing suggests that the caterpillar may have spun that web to keep it in place as it began pupating. Of course, it could also be a spider’s web, but we are hoping that our first guess is correct. To deal with these pupae, we suggest our reader simply move them outside on a dustpan. It is doubtful that the caterpillars intended to infest the garage: they probably took shelter on the ceiling of the garage because it was a safe and dry spot to begin pupation. After all, it is at this stage that the insect is most vulnerable. Additionally, since one of the pupae was found in the toilet paper, they could have been brought in on the toilet paper, or one of them dropped from the ceiling onto the toilet paper (which we find more probable).

In conclusion, we think that the creature in the photo is a pupa, and if all the other creatures look like this one, then they too are pupae. They most likely ended up on the ceiling because the larvae migrated there for safety and warmth, and not because they intended to infest the garage. We hope this article helps and we wish our reader the very best!

Article Name
Brown Worm-like Critter Found in Toilet Paper is a Pupa
Description
This reader writes to us after finding "worms" in her toilet paper. The worm-like creature, pictured below, appears to be brown in color, and trapped under some sort of webbing.
Author
Worm Researcher Anton
Share the knowledge

People helped by this info: 443