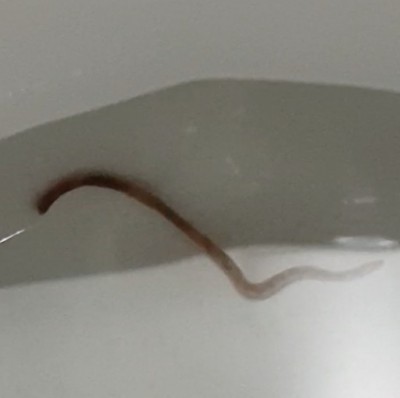 When readers find mysterious worms in their homes, they usually discover them near their beds, in their pantries, or in their bathrooms in the toilet or shower. When they find them near their beds, they are typically dealing with carpet beetle larvae. When the worms are found in their pantries, they are often pantry moths or mealworms, and when they are found in their bathrooms they are almost always either earthworms, midge fly larvae, or drain fly larvae. Today, we will respond to a reader who found a worm-like organism in his toilet. So, is it an earthworm, midge fly larva, drain fly larva, or something else? Here is the photograph he sent us: 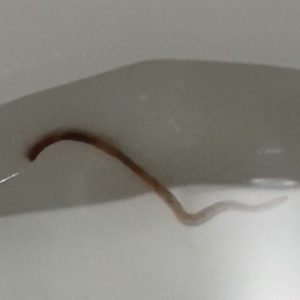 Right off the bat, we can confidently rule out the possibility of this being a midge fly larva or a drain fly lavra based on the size, shape, and color of the creature. Both midge fly larvae and drain fly larvae are tiny organisms and neither looks anything like the specimen in our reader’s toilet. Therefore, we think this is probably an earthworm. Earthworms come in a range of colors, including brown, and they are similar in size and shape to the creature our reader discovered. Our only hesitation is that earthworms are segmented, and we can’t tell if the organism in the photo is segmented or not. Even so, we still believe this is likely an earthworm.

While we respond to readers who find earthworms in their toilets all the time, we still aren’t completely sure how exactly these worms end up in their toilets in the first place. Since earthworms live underground in moist soil, we think the most probable explanation is that they get in through the plumbing system via a small gap or crack in the pipes. Although having a problem with your plumbing system is not a laughing matter, we don’t think our reader needs to call in the professionals right away. We think he can start by simply removing this worm and placing it outside. If more worms turn up in his toilet, it might be time to consider calling a plumber. If he doesn’t discover more worms, he can forget about it for now. We also think it would be smart for him to give his toilet (and bathroom) a thorough cleaning to deter other worm-like organisms from visiting. He can use a cleaning agent that will eliminate organic material, which is what most worms and larvae eat.

To wrap up, we believe the brown worm our reader found in his toilet is an earthworm. Earthworms aren’t known to carry or transmit any human diseases, so they are generally considered to be harmless!

Article Name
Brown Worm in Toilet Probably an Earthworm
Description
We believe the brown worm our reader found in his toilet is an earthworm. Earthworms aren't known to carry or transmit any human diseases, so they are generally considered to be harmless!
Author
Dori Franklin
Comments: 0 Posted by: Worm Researcher Dori Categories: Earthworms