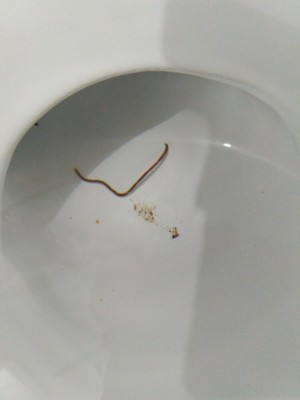 We recently heard from a reader who discovered a brown worm in her toilet. The wording she used in her message was a little unclear, so we don’t know if she found this worm in the toilet after using it, or if she lifted the lid and then noticed the specimen. Although this is a small detail, it is actually pretty important. If she found the worm after using the toilet, it is possible it came from her body, but if she noticed it before using the toilet, then it definitely did not. Based on the appearance of this worm, we don’t think it is a parasite that came from her body: 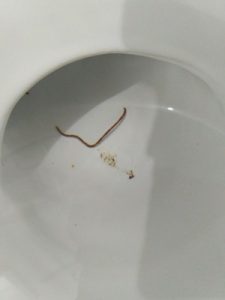 The worm is skinny, brown, and a few inches long. We believe this is probably an earthworm. Earthworms can vary a bit in appearance, but the shape, size, and color of this worm all fit that of an earthworm. Also, readers find earthworms in their toilets pretty often, so the location where she found it is also a match. Our only hesitation is that earthworms have segmented bodies, and we can’t tell if this creature has a segmented body or not. It definitely could, we just can’t determine this based on the photo. 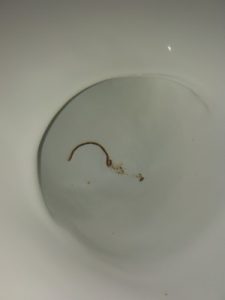 If this is an earthworm, and we think it probably is, our reader doesn’t need to stress out about finding it. She can remove it and place it outside if she hasn’t already done so. Earthworms live in moist soil and sometimes get into a toilet bowl by means of a small crack in a pipe or the plumbing system. If this is the first and only worm our reader has found in her toilet, she can just write it off as a chance occurrence. If she has found other worms in her toilet, or continues to discover worms after this, then she might want to contact a plumber to look for potential cracks in her pipes. Finally, if she is worried that this worm came from her body, or thinks she might be sick with a parasite, then we encourage her to see a doctor ASAP. Since we aren’t medical professionals, we are not licensed to give medical advice of any kind, so any questions about her health will have to be answered by a doctor!

To wrap up, we think the brown worm our reader found in her toilet is probably an earthworm. Readers discover earthworms in their toilets a few times a month, so we don’t think our reader has anything to be concerned about!

Article Name
Brown Worm in Toilet Probably An Earthworm
Description
We think the brown worm our reader found in her toilet is probably an earthworm. Readers discover earthworms in their toilets a few times a month, so we don't think our reader has anything to be concerned about!
Author
Dori Franklin
Comments: 0 Posted by: Worm Researcher Dori Categories: Earthworms, Worms Found in the House