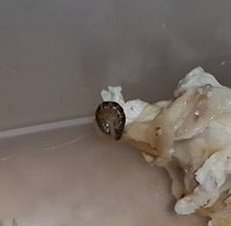 A reader wrote to us the other day via the All About Worms Facebook page about some brown striped worms (or potentially larvae) he found in some store-bought chicken. We aren’t sure what kind of chicken he bought – rotisserie, a container of several pieces, etc. – but we know it was cooked and ready to eat. He had already eaten some of the chicken before he noticed the worms, and therefore was concerned that he had accidentally eaten some of them. The reader was therefore keen to identify the worms (or larvae) he found in his chicken, and that’s where we come in.

First, here is the picture the reader sent in:

The picture we were sent was quite a bit larger, but we couldn’t see any other worms in it, so we focused in on creature in question.

People find worms/larvae in food with some regularity, but they are almost always found in fruit or vegetables from a garden or in some sort of dried good (e.g., flour) in the pantry. Finding a worm in a cooked piece of chicken, however, is evidently quite rare. We have never heard of this happening, and it also took a long time to turn up any information that might be at all helpful.

The best suggestion we can come up with is that our reader found gapeworms (Syngamus trachea), which are parasitic nematodes that infect the tracheas of certain kinds of birds, including chickens. Chickens can suffer from a variety of different parasitic worm infections, but none of these look anything like the creature pictured above. Gapeworms, however, are at least a dark color (they are reddish brown in the fairly graphic photos we looked up), and might be approximately the same size as the creature pictured above. Gapeworms infect the windpipes of chickens, though, so it would be strange to find one in a piece of chicken for human consumption (like, say, a breast). Our only thought, taken from a response to a person who evidently had a similar problem as our reader, is that the gapeworm ended up in a regular piece of chicken as a result of the butchering process. We suppose it is also possible that a flawed butchering job could have led to a parasitic intestinal worm being spread to regular pieces of chicken, but the most common type of intestinal worm infection in chickens is caused by Ascaridia galli, a type of roundworm, and these parasites don’t look like the creature in the above picture.

Everything we have said relies on the assumption that worm actually came from the chicken, and of course this may not be true. It could be the case that at some point, either before or after the chicken was cooked, some worm or larvae crawled into the meat’s container for no particular reason. (Because it was moist, maybe?) If this is the case, there is no essential connection between the chicken and the type of worm/larvae found with it – in other words, the creature isn’t in the chicken container because it contains chicken – and then it could be one of thousands of different types of brown larva.

So, unfortunately, we can’t be certain what worm was in our reader’s chicken, but we will conclude by saying that he needn’t necessarily fear what he found, even though it is obviously disgusting. As we point out in an article about eating worms, if the worms were fully cooked along with the chicken, they likely couldn’t infect our reader with anything, and of course he may not have eaten any worms at all. He may also take some small comfort in knowing that insects are widely consumed in many places in the world, like the Philippines. That said, he should of course be cautious if he is experiencing any health problems. We aren’t medical doctors, and we certainly don’t want to claim that eating any given worm or larvae won’t cause problems – it obviously could. Thus, we don’t think our reader needs to panic, but he should be mindful of his health just in case he was exposed to anything harmful.

Article Name
Brown Striped Worms in Store-Bought Chicken
Description
The best suggestion we can come up with is that our reader found gapeworms (Syngamus trachea), which are parasitic nematodes that infect the tracheas of certain kinds of birds
Author
All About Worms
Share the knowledge