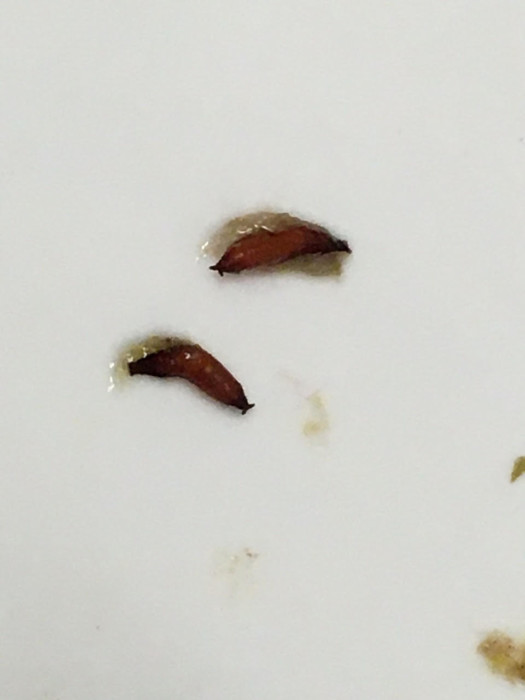 “What are these?” asks this reader about the brown creatures pictured below. “Tons of them in the drain pipe, but they don’t look like drain fly larvae. Thank you!” The creatures above look stubby and thick, brown in color, with black antennae and what appears to be a layer of grayish slime oozing from their undersides. From the image alone, we have concluded that these are most likely slugs. Given their small size, we suppose these could be immature slugs, but in any case, their slimy undersides and antennae give away their identities.

Slugs are notorious garden pests: they eat lettuces and cabbages, and plenty of other plants and veggies that people typically grow in their gardens. People are usually also not very fond of them because of their slimy bodies and strange appearance. Despite this, slugs are pretty fascinating creatures. Slugs are directly evolved from snails, so they share many of the same qualities. One quality that slugs possess is their ability to regrow their bodies if one part is cut off. In fact, to make up for their lack of speed, some species can even amputate their own tail in order to get away from a predator who already has the slug in their mouths. The aim is to leave the too predator stunned to continue pursuing the slug. Likewise, the slimy goo that covers a slug’s body makes them slippery to the touch, and is supposedly foul-tasting, which may prompt some predators to spit the slug back out, thus sparing its life.

Now, our reader does not specify if the drain pipes the slugs were found in was in her home, but assuming they were, we think she should contact a plumber. It is likely that there is a leak in the pipes somewhere underground through which the slugs crawled. Since slugs burrow underground, especially during cold or dry seasons, this is not an implausible situation. Other signs that might point to a leak include foul-smelling water, changes in water pressure, and discoloration of the water. Additionally, if our reader cleans her drains with boiling water and bleach (or some other cleaning agent), it may help discourage slugs (and other critters) from making their way up the drains. Those organisms are typically in search of decomposing organic matter to eat, so cleaning the pipes of such materials will dissuade them from searching for food there. When it comes to the slugs that have already made their way up the drain, we suggest just moving them outside.

In conclusion, the brown organisms our reader found in a drain pipe are slugs. They are not directly harmful to humans (unless consumed, as they can carry pathogens and parasites), but their presence in the home is understandably not welcome. We hope this article helps and we wish our reader the very best.

Article Name
Brown, Slimy Creatures Found in Drain Pipe are Slugs
Description
"What are these?" asks this reader about the brown creatures pictured below. "Tons of them in the drain pipe, but they don’t look like drain fly larvae. Thank you!" The creatures above look stubby and thick, brown in color, with black antennae and what appears to be a layer of grayish slime oozing from their undersides.
Author
Worm Researcher Anton
Share the knowledge

This many people searched for this info: 125