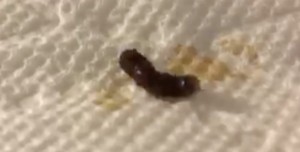 Some readers just sent us a 5 minute video featuring a tiny brown creature crawling around on a paper towel. They wonder what it is. Here are some screenshots from the video: 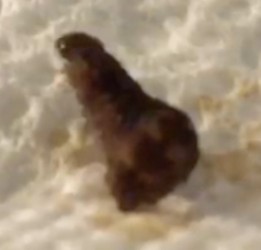 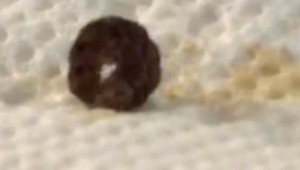 By listening to the audio of the video, we were able to pick up on some details about the critter. However, since the speakers were just communicating with each other, not directly narrating to us, it is confusing to separate facts that relate to the specimen from just a general conversation these ladies were having. So, we are hesitant to confirm any of this, but here is what we understood by listening to the clip…

-The specimen was found on a bed or a blanket. We believe this is true because one of the speaker comments about how she will know have to clean her whole bed since discovering this critter. Also, she mentions that her husband found eggs on the bed. Could those eggs be worm/insect eggs?

-One of the readers squeezed the creature when she picked it up and it has been excreting a brown liquid. We can’t confirm whether the excretion was a result of the squeezing, or if it has to do with another factor. For example, there are some species of caterpillars that puke as a defense mechanism.

-The critter could be dying or “drying up”. One of the readers seemed convinced that since they squeezed the specimen and a brown liquid was coming out of it, then that might mean that the worm was not going to live for much longer.

-The specimen is very small, has a brown body with a lighter underside, a small brown head, and legs on both sides that it uses to raise its body up during one portion of the video (pictured in the second image).

After watching the video several times, we believe that these ladies have found either some sort of insect larva, or a caterpillar. The specimen looks a little like a grub, which is beetle larva. However, we think it more closely resembles a caterpillar. We aren’t sure which kind of caterpillar, or moth larva, this specimen is, but there are over 20,000 known species of caterpillars!

To conclude, we just got a video of a brown organism wiggling around on a paper towel. We think it is probably a caterpillar, but we aren’t sure which kind. If any of our readers think they recognize this critter, we invite them to comment on this post in the comments section!

Article Name
Brown Organism is Probably a Caterpillar
Description
Some readers just sent us a 5 minute video featuring a tiny brown creature crawling around on a paper towel. They wonder what it is.
Author
Dori Franklin
Share the knowledge

This many people searched for this info: 588