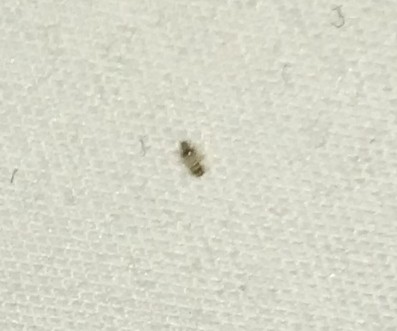 A reader wrote to us recently about a “worm/bug” he has been finding on his bed sheets for several days in a row. Upon zooming in on one of the photos our reader sent in, the creature in question appears to be ovate in shape, black and white in color (though given the image’s quality this is uncertain), and has bristles surrounding its body. 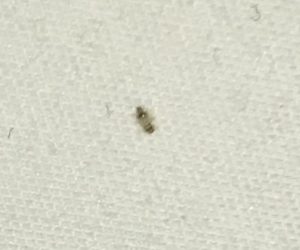 Our reader is afraid that he got bed bugs from when he went traveling a week prior to sending his query, though he has not noticed any bites. He mentioned that when putting his finger close to the bug, it climbed onto his skin and seemed to lift its back end a lot. In addition to this, our reader spotted “‘feelers'” on the bug, which are visible in the image above. We think that the feelers our reader noticed were actually bristles. This, in conjunction with the creature’s apparent striped pattern of colors, has led to us to believe that the critter our reader found is a carpet beetle larva.

Carpet beetles are common pests of the household whose larvae can wreak quite a lot of damage to fabric-based furniture. As the larvae feed on animal-based textiles, one can often find them chewing holes through carpets, clothing, and upholstered furniture. Additionally, carpet beetle larvae also eats lint, crumbs, pet food, and dead insects, among other things. We would guess that the particular larva that this reader found was that of the black carpet beetle larva, given its coloration. What is different about this species of carpet beetle larva is the size to which it can grow, getting as long as 8mm, while the ‘normal’ carpet beetle larva tends to be 4-5mm. Once fully grown, carpet beetles feed on nectar and pollen, but have been known to get into human food as well when present in the house, thus making them pests nonetheless, even when fully grown.

Our reader will be happy to know then that these are not bed bugs, although carpet beetles are equally difficult to get rid of. To rid one’s home of a carpet beetle infestation, one must first locate the source, which will be given away by roaming larvae and beetles (in this case it is likely our reader’s bed, where he has been spotting them every day) and old skins that they have abandoned. Looking for the eggs or pupae of carpet beetles is fruitless, given that they will usually be hidden between the fibers of the carpet, or between the folds of clothing or other fabrics. Once the source is located, one must vacuum that area in order to – hopefully – rid the area of all the organisms and eggs. Then, it is important to launder all the pieces of fabrics in the source’s vicinity in extremely hot temperatures to ensure the eradication of all the carpet beetles that may have remained. Furthermore, if our reader wishes to employ measures for preventing future infestations of carpet beetles, some ideas he may want to take into consideration are: sealing cracks in walls and flooring, ensuring the wholeness and quality of window screens, and storing animal-based fabrics in vacuum-sealed bags or in a cold vault.

To conclude, the worms our reader found on his bed are carpet beetle larvae. While these critters are not dangerous or harmful toward humans, they can still prove to be an unfavorable guest in one’s home, but by following the methods listed above, we are confident that our reader can have these carpet beetles gone in no time.

Article Name
Bristly Worms on Bed are Carpet Beetle Larvae
Description
A reader wrote to us recently about a "worm/bug" he has been finding on his bed sheets for several days in a row. Upon zooming in on one of the photos our reader sent in, the creature in question appears to be ovate in shape, black and white in color (though given the image's quality this is uncertain), and has bristles surrounding its body.
Author
Worm Researcher Anton
Comments: 0 Posted by: All About Worms Categories: Carpet Beetle Larvae, Pest Worms, Worms Found in the House