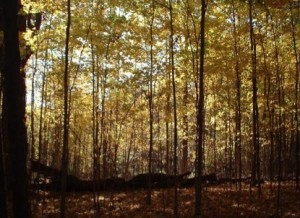 Brightly Colored Caterpillars in the Woods

We say this is a “seemingly” simple question because in fact it is actually not that simple. The reader may only be asking one thing, but what he is asking is quite difficult: to identify a caterpillar with the help of only one unclear picture. The reader didn’t supply any additional information, like where he found it (in terms of geography), so the picture is all we have. Identifying caterpillars is always hard because there are tens of thousands of species, and it is especially hard when we possess incomplete information. However, we do have the picture, so we’ll do with it what we can. Here it is: 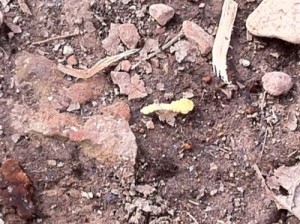 As you can see, the photo is overexposed, making it difficult to decipher exactly what you are looking at initially. Indeed, it is not even immediately clear what the creature in question is – a couple of things look like they might be alive. However, we are pretty sure the reader is wondering about the creature in the middle, the one that is white (but may in fact be another light color washed out in the photo) and appears to have a segmented body. So, what kind of caterpillar is this?

Unfortunately, we can’t answer our reader’s question with anything resembling certainty. We have too little information, and the picture isn’t clear enough to offer a well-informed suggestion to our reader. We encourage him to look into swallowtail caterpillars, however, as he’ll probably at least be able to recognize a match of what he saw.