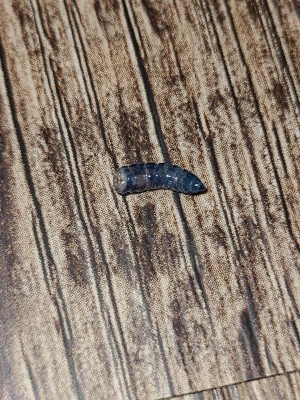 Several worm-like creatures have been found in this reader’s daughter’s room, and she asks if we happen to know what they are. The creatures in question appear to be blue in color, with segmented, legless bodies, and a white, flat face with two discolored orbs in the center.

The closest thing we found to a match with our reader’s worm is the caterpillar of the labyrinth moth (Phaecasiophora niveiguttana). However, that larva is far longer, with a round, blue head, clearly distinguished from its body. That being said, the segmentation, coloration and general shape of the body matches. The creature our reader found looks like it could be a labyrinth moth larva if it were cut in half. It is especially difficult to distinguish what the white, flat surface on the left end of the creature is; is it a face or its insides? We would definitely be interested to see pictures of the other worms our reader found, seeing as she reports finding “a lot” of them. We wonder if they would all have the same appearance.

So, despite not being able to say for certain if this is a labyrinth moth caterpillar or not, what we can say is how to deal with this infestation. First, one would want to locate the source of the larvae, which is usually indicated by dense populations of the larvae and trails of waste materials or webbing left behind. Luckily for our reader, her daughter seems to have found the source already: her room. The number of larvae found in her room indicate that. This also indicates that they likely hatched in that room as well. Our reader will want to look under and in wardrobes, drawers, beds, and any furniture that might house small and dark spaces where bugs could hide. Secondly, she will want to vacuum up any eggs and webbing found, as well as move any larvae outside. Thirdly, she may want to launder any textiles in the room and around the home, so any eggs and/or larvae that got stuck to the material will be eliminated. Of course, our reader did not mention specifically where in the room the larvae were found, so this might not be necessary as the labyrinth moth is not known to be a clothes moth, and so the larvae might not even have ventured to those kinds of places.

In fact, not much is recorded about this moth at all in terms of its biology and behavior, so we are not certain what its diet actually consists of, and we cannot be sure what led to these larvae being discovered in a mass quantity in our reader’s daughter’s room. There are species of moth caterpillars that feed on animal-based textiles, such as the webbing clothes moth larva, and so perhaps this larva was likewise attracted to some kind of material in the room that it could eat. However, given that a bunch were found concentrated in one spot, we would assume that the larvae were found there simply because the mother moth flew into the room and laid her eggs there, either because it was an adequate climate and was sheltered from weather, or simply because it was time.

To conclude, we are not sure what these larvae in our reader’s daughter’s room are, but we are leaning toward identifying them as labyrinth moth caterpillars, as that is what they most closely resemble. If our reader has any more pictures of any of the other larvae in the room, we would be happy to look at them to potentially provide a more confident identification. Likewise, if any of our other readers have any clues as to what these larvae might be, they are free to voice their suggestions in the comments below!

Article Name
Blue Larvae in Bedroom May Be Labyrinth Moth Caterpillars
Description
Several worm-like creatures have been found in this reader's daughter's room, and she asks if we happen to know what they are. The creatures in question appear to be blue in color, with segmented, legless bodies, and a white, flat face with two discolored orbs in the center.
Author
Worm Researcher Anton
Share the knowledge