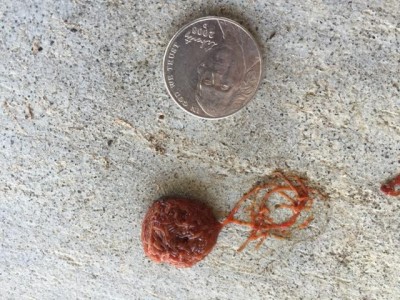 Bloodworms Clump Together on Patio

We recently received some fascinating photographs from a reader: 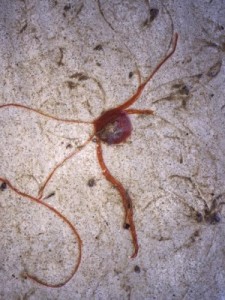 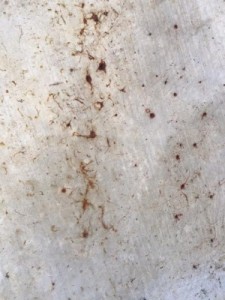 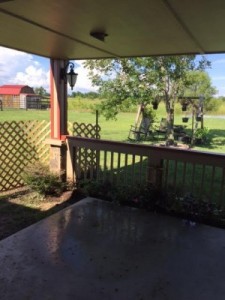 He explained that these red-colored worms appeared on his back patio where there is a light fixture that is leaking. He guessed there are probably hundreds to thousands of these tiny creatures. We can see how small some of them are by using the picture of them by the nickel as a comparison. Some of them clump together to form balls, and others separate. His main two questions are do we know what kind of worms these are, and are they harmful to pets?

After some close examination of the photographs, we came to the conclusion that these are likely bloodworms. We also considered earthworms and red wrigglers, which are both common composting worms, but we ruled those out because the featured worms are so tiny and they don’t appear to be segmented. Bloodworms are named for their blood-red coloring, but they are also known as midge fly larvae. We have heard from readers who have discovered these worms in their bathrooms, and also once buried in sand. They need a moist environment, so perhaps they are attracted to the humidity and excess moisture created by the leaking light fixture.

We aren’t sure where these worms are coming from, or why they have made such a home on our reader’s patio. However, we do have some ideas about why they are clumping together to form balls. There is one study that suggests that worms clump together when the environment they are in is not quite ideal. This could be due to low temperatures,  food shortage,  or when they are out in the open (like in this situation). Bloodworms do not bite or string and are not directly harmful to humans or animals, but they could potentially carry diseases. However, this is not very likely.

To summarize, a reader asked us about some curious red worms that appeared on his patio by the hundreds. We believe these are midge fly larvae, which we often refer to by their nickname: bloodworms.

Summary
Article Name
Bloodworms Clump Together on Patio
Description
A reader asked us about some curious red worms that appeared on his patio. We believe these are midge fly larvae, which we often refer to by their nickname: bloodworms.
Author
Dori Franklin
Comments: 0 Posted by: Worm Researcher Dori Categories: Segmented Worms Annelida