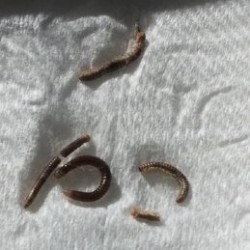 Blackish, Brownish Worms by the Base of the Toilet

A reader wrote to us recently about some blackish, brownish worms with round heads that he found at the base of his toilet a couple of weeks after the toilet flooded. The reader indicated that the worms’ bodies were segmented, and also that they have antennae. Perhaps because he found them around his toilet, the reader was wondering if he had found moth fly larvae. So, did our reader find moth fly larvae, or might the blackish, brownish worms at the base of the toilet be something else?

First, here is the picture the reader submitted with his question:

Although moth fly larvae are commonly found in or around toilets – in fact, we have written about moth fly larvae in toilets before – the creatures above don’t look like the larval form of moth flies, which tend to have lighter colored, and sometimes almost translucent, bodies. Their bodies often have stripes as well, and although adult moth flies have antennae, this feature isn’t really noticeable when they are in the larval life stage. So, the creatures that our reader found were in an environment conducive to moth fly larvae, but they simply don’t look like them, and so we think that our reader didn’t find moth fly larvae.

What, then, did he find? Even with a good picture, it is hard to say. A staggering number of larvae, worms, and worm-like creatures might be found in homes, and many of these creatures look very similar. Thus, we aren’t sure what our reader found, but it is worth mentioning that the creatures pictured above look like millipedes, and in fact this was our first thought when we saw the picture before looking over our reader’s email. Millipedes do have segmented bodies and antennae, and the color of their heads is sometimes distinct from the rest of their bodies (as appears to be the case, at least to some extent, with the creatures above). Millipedes are also extremely common household pests that require moisture to survive, so they could be found at the bottom of a toilet after a recent flooding (although hopefully things are dry at this point). The most notable feature of millipedes are of course their legs, and we can’t see any in the image above, nor did the reader mention any. This of course raises doubts about our suggestion. However, unlike centipedes, the legs of millipedes are often tucked under their bodies, making them difficult to see, especially from an aerial view. So, the fact that legs didn’t come up in our reader’s email isn’t inconceivable, and we also aren’t surprised that we can’t see them in the image he sent to us.

Overall, we don’t know what our reader found, but we are pretty sure they aren’t moth fly larvae, and we suspect they might be millipedes. To confirm or dismiss the latter suggestion, the reader can look at the bottom of the creature’s body to check for legs. If there are tons of legs (two on most body segments), then he found a millipede. If not, the quest for identification continues.

Article Name
Blackish, Brownish Worms by the Base of the Toilet
Description
Did our reader find moth fly larvae, or might the blackish, brownish worms at the base of the toilet be something else?
Author
All About Worms
Comments: 0 Posted by: Worm Researcher Evan Categories: Pest Worms