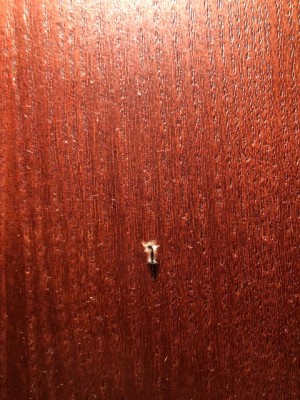 “I found these things hanging from the ceiling,” says our reader about the creature in this photograph. This worm-like critter appears to have a “fluffy”, black body and is minuscule in size. 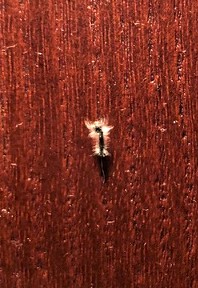 In addition to this photograph, and a couple of videos that demonstrate how the creature moves and provide a size comparison to some text on a jar, our reader tells us that after having searched our website, he has not been able to find something “exactly like this”, though it seems similar to the moth larvae we wrote about in a previous article. Our reader explains that in the photograph, the creature is scaling a cupboard door, whilst in the two videos, the worm is crawling on a paper towel and then crawling on a jar. Although he threw mothballs and borax with cornmeal at the source of the supposed infestation, still more of these creatures have appeared. “They have threads similar to a spider,” our reader adds, by which we assume he means the threads are coming from the worms themselves. Finally, he tells us he would appreciate any feedback and asks if he should be worried.

Now, upon our hunt for black-bodied worm-like creatures with white bristles, we came across a fair amount of species, all of which range in sizes and shapes. Unfortunately, the miniature size of our reader’s creature makes it difficult to make out the finer details, but at the same time, its size does also narrow down our options. To us, this creature looks most like an oak processionary moth caterpillar, though we cannot say that it is one for certain. At their larval form, these guys grow up to no longer than 2.5 centimeters (roughly an inch), though they can also be smaller. Oak processionary moths live in forests, where their caterpillars feed on the leaves of oak trees. They have been known to wreak quite a lot of damage and this is likely due to the fact that these critters tend to stick together. Their diet of oak leaves may give them the first part of their names, but the second part of the oak processionary moth’s name comes from the caterpillars moving in single-file processions.

That being said, these creatures could alternatively be hickory tussock caterpillars. Otherwise known as the hickory tiger caterpillar, this is the larval form of a hickory tussock moth. These caterpillars are also white and appear furry, though just like the oak processionary moth caterpillar, what looks like hairs are actually bristles. Similarly, these are also a defense mechanism for the caterpillar and are thus not to be touched. Coming into contact with them may occur in irritation of the skin, rash, or dermatitis. It should be noticed that this is not due to the bristles actually being toxic, but more to do with allergic reactions. These caterpillars naturally occur in forests, where they feed on the foliage of various trees, and so also do not have any business lurking about someone’s home. Either way, it is possible that the creatures our reader found are hickory tussock caterpillars.

To conclude, we would say that the worm-like creatures our reader found might be oak processionary moth caterpillars or hickory tussock caterpillars, though this is definitely up for debate. With that in mind, we encourage any of our other readers to reach out to us in the comments section if they have any ideas about the true identity of these creatures. Additionally, if our reader does decide to put a few of the caterpillars in a container and wait for them to grow, we urge him to send us more pictures and updates about them, so that we may renew our own information on these curious critters. Finally, we advise caution with these creatures, hope that we have helped in some way, and wish our reader the best of luck!

Article Name
Black Worms with White Hair May Be Oak Processionary Moth Caterpillars or Hickory Tussock Caterpillars
Description
"I found these things hanging from the ceiling," says our reader about the creature in this photograph. This worm-like critter appears to have a "fluffy", black body and is minuscule in size.
Author
Worm Researcher Anton
Comments: 0 Posted by: All About Worms Categories: Caterpillars, Garden Worms, Worms Generally