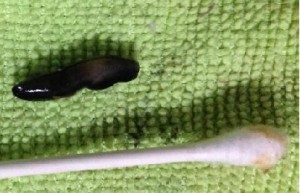 A reader wrote to us a few days ago about some small black worms she found at the bottom of her kids’ laundry basket. She also found a couple more worms when transferring their clothes from the washing machine to the drier, so the worms can evidently be traced back to the clothing of her children. The reader was wondering what these black worms in the laundry basket are, and we think they might be leeches (which are actually worms) or potentially slugs (which aren’t worms).

Before discussing either possibility, here is the excellent picture the reader sent in:

As you can see, the worm is fairly small, as it is only about a quarter of the length of a cotton swab.

Even with this clear picture, it is difficult to determine exactly what this creature is, and we think it is a leech for the simple reason that it looks like one. However, in order to confirm this suggestion, we would need to look more closely at the creature to see if it has suckers on each end of its body. The oral sucker is used by the leech to suck blood out of its host, and the posterior sucker is used for movement. (Basically, they move like inchworms, with the leech moving forward by planting and releasing it suckers on surfaces.) These suckers, should the creature above have them, also provides some explanation for how they ended up inside the laundry basket: our reader’s children were perhaps walking through some area where there are leeches, and they latched onto their clothing. (Most leeches live in aquatic environment, but there are plenty of terrestrial species as well.) Eventually, the leeches would have made their way through the clothing’s fabric and latched onto the children’s skin, but evidently (and fortunately) they didn’t have time for this.

Since leeches are annelids, their bodies are segmented, and this is the one problem with the leech hypothesis. On many leeches, you can see their body segments pretty clearly, in the same way that you can see the body segments of earthworms. However, this isn’t true of all leeches, as some appear to have smooth bodies like the creature above (although its body structure is kind of hard to discern). If the reader didn’t find leeches, it is possible she found a slug, although the major problem with this suggestion is that the creature above doesn’t have tentacles, which look like antennae. Not all slugs have tentacles, and these tentacles are also retractable, but they are generally a noticeable feature, one that appears to be lacking from the creature above.

Overall, then, we think a stronger case can be made for leeches, although we definitely aren’t certain of this. Even with a nice image, it is often difficult to identify what we are looking at. However, the creature above at least looks like a leech, and there is also an explanation for how they ended up in the laundry basket, so we encourage our reader to explore this suggestion to confirm (or reject) it.

Article Name
Black Worms in Laundry Basket - Leeches or Slugs?
Description
A reader wrote to us a couple of days ago about some small black worms she found at the bottom of her kids' laundry basket.
Author
All About Worms
Comments: 0 Posted by: Worm Researcher Evan Categories: Pest Worms