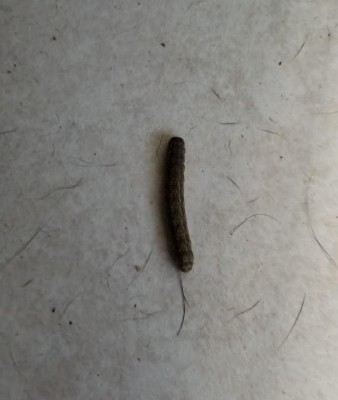 A man in Redendo Beach, CA has been finding worms on his kitchen floor. Our reader took an excellent photo of a black worm with a long, ovate body with a pattern of gray and black markings along its back. 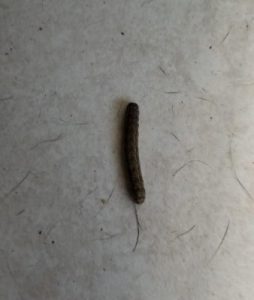 This creature is likely a cutworm. Cutworms are moth larvae that get their name from their tendency to eat the stems of plants and thus cut them down in a rather efficient manner. Young plants are especially prone to their attack as their stems are far more tender and easier to chew through. They come in a range of colors, ranging from brown to pink to black, and can either be matte or glossy. There are so many variations to how a cutworm can look that one identifying trait can not really be defined. For the same reason, we will not be able to identify the specific species of this cutworm. Furthermore, certain species of cutworms actually climb the length of the stems instead of eating them, and instead feed on on the leaves and buds of the plant. When the larva is fully matured, it can be up to two-inches long and, like the millipede, will roll up into a ‘C’ shape when disturbed.

As cutworms only feed on plants, though the range of plants is quite large (including cabbage, carrots, asparagus, lettuce and more), they are not a direct threat to our reader, but perhaps to his house plants. The adult cutworm moth does not feed on plants and is thus rendered completely harmless. Hence, it is likely that the cutworms our reader has been finding were either carried in as eggs on something and then hatched within the house, or that the mother moth flew in and laid her eggs inside the home. This would not have been for dietary reasons, seeing as cutworm thrive more in the outdoors, near their food source, but rather would have been for reasons of shelter. For this reason, we would propose that simply moving every cutworm our reader finds outside will suffice in controlling this ‘infestation’, as the cutworms will not be tempted to return as there will not be a sufficient amount of food for them.

To conclude, the worms our reader has been finding on his kitchen floor are cutworms. However, if our reader should find that the infestation does not stop, and he thinks they might be something else, he may feel free to contact us again with more pictures and information.

Article Name
Black Worms Found on Kitchen Floor are Cutworms
Description
A man in Redendo Beach, CA has been finding worms on his kitchen floor. Our reader took an excellent photo of a black worm with a long, ovate body with a pattern of gray and black markings along its back.
Author
Worm Researcher Anton
Comments: 0 Posted by: Worm Researcher Anton Categories: Caterpillars, Garden Worms, Worms Generally