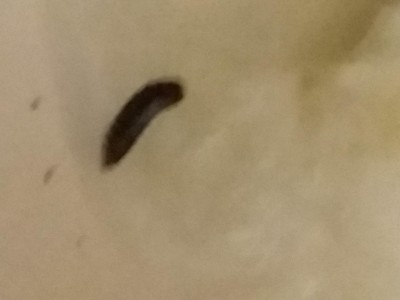 One of our readers recently sent us a photograph of a black or dark brown worm-like organism. The photograph was the entirety of the message. He didn’t include any questions or details about where he discovered the specimen. Therefore we will have to assume he is curious about what the creature is. Here is the picture he sent: 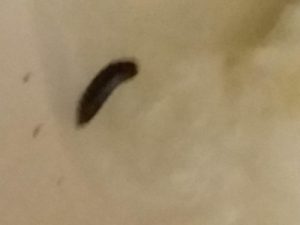 The picture is a little blurry, but it still gives us some information. We know the creature is black or dark brown. Its body is more round than thin, and it looks like it might be segmented. We don’t see any legs or other appendages, but that doesn’t mean they aren’t there. Since there is no other recognizable object in the photo to use as a scale, we don’t know the size of the specimen. We also don’t know where the creature was found, neither geographically nor which specific room or area in his house. The geographic location often isn’t too important to know because many common household pests are found in most places, but sometimes certain worm-like organisms are only found in certain states or regions. The specific location of discovery in a house is a much more crucial clue when trying to identify a worm. This is because specimens tend to choose different rooms and environments to live in based on their food choice and ideal habitat. For example, drain fly larvae are typically found in a toilet or shower, but would rarely (if ever) be discovered on a bed or couch.

So, we will be attempting to make an identification solely off of the slightly blurry picture our reader sent because we don’t have any additional information. We believe the creature in the photo most resembles a black soldier fly larva (BSFL for short.) Black soldier fly larvae are found by readers from time to time in their garbage cans or compost piles since the larvae are excellent decomposers. They eat food waste/scraps, dead animals, and manure and then return nutrients back to the environment. If our reader found one of these larvae in his home, he should investigate his trash bins for additional larvae and clean the surrounding area. He doesn’t need to stress out about this discovery since BSFL aren’t considered to be harmful or dangerous.

To conclude, one of our readers discovered a mysterious worm-like organism that he sent us a photo of. We think it might be a black soldier fly larva, but we made that identification with very little information, so we could be wrong.

Article Name
Black Worm Might Be Black Soldier Fly Larva
Description
One of our readers discovered a mysterious worm-like organism that he sent us a photo of. We think it might be a black soldier fly larva, but we made that identification with very little information, so we could be wrong.
Author
Dori Franklin
Comments: 1 Posted by: Worm Researcher Dori Categories: Worms Found in the House