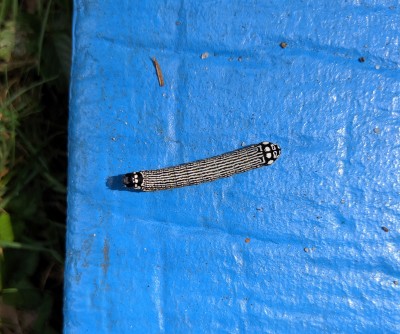 Multiple of the following worms were found by this reader in his flower bed while he was weeding. He suspects that these black and white creatures are beetle larvae, but wonders if we could help identify them. 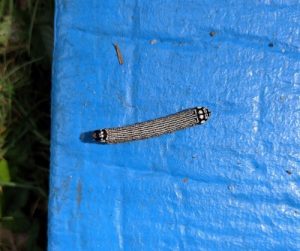 The critter in this excellently-taken photograph is not a beetle larvae though, but is in fact a turbulent phosphilia caterpillar (phosphilia turbulenta). This caterpillar, which is common in the Eastern United States, is the larva of the turbulent phosphilia moth. While the top of these caterpillars is black and white, with the striped pattern and white spots on either end, the underside of these creatures is yellow, with the same white stripes. These caterpillars, which tend to grow no longer than a mere 3.5cm, can commonly be found congregating in huge masses on plant stems (see image below), or on the underside of leaves, and specifically on the leaves of the greenbrier plant (also known as Smilax), as the Smilax is the only plant species on which these caterpillars will feed, according to RoadsEndNaturalist. For this reason, our reader needs not fear this caterpillar destroying his flower bed, unless he has got this specific plant in it. These caterpillars are probably just passing by.

Furthermore, the bright spots on both ends of the caterpillar are said to work as false eyespots, providing the illusion that both ends of the caterpillar are its heads, and the big white eyespots functioning as defense mechanisms against predators. Likewise, according to the same source, the bright coloration of the caterpillar suggests that it may be “chemically protected”, although it is not certain. Nonetheless, if our reader needs to handle these worms, i.e. to move them, then we suggest wearing protective gear, like gardening gloves. Even if these caterpillars do not release some sort of toxin through their skin, one cannot be sure if one might experience an allergic reaction from skin-to-skin contact. Strangely enough, although the caterpillar is quite the spectacle, the adult moth is boring to behold. Once fully grown, the turbulent phosphilia is a mottled brown/gray all over, not even closely resembling its larval form.

In conclusion, the larvae our reader found in his flower bed were turbulent phosphilia caterpillars. These harmless critters are a sight to behold, so our reader should enjoy their company before they mature into their dull adult forms! If our reader does experience that these caterpillars are becoming a pest to his flower bed, and that his garden becomes infested with them, then he should feel free to contact us again.

Article Name
Black and White-Striped Larva in Flower Bed is a Turbulent Phosphilia Caterpillar
Description
Multiple of the following worms were found by this reader in his flower bed while he was weeding. He suspects that these black and white creatures are beetle larvae, but wonders if we could help identify them.
Author
Worm Researcher Anton
Share the knowledge

This many people searched for this info: 902