The reach of All About Worms is international – just ask our reader from Saudi Arabia, who recently wrote in with an extraordinary tale of worms (or possibly – nay, probably – caterpillars) that he found about 120 kilometers (75 miles) west of Riyadh, the capital of and largest city in Saudi Arabia. The (likely) caterpillars he found were primarily green (multiple shades of green, in fact), but they were also black with a brown (and somewhat red) stripe that runs down the length of their bodies. The reader also reports that the “worms” have some type of horn on their body, although it is somewhat hard to see in the picture he sent (see below). He was wondering what he had found, and if they are poisonous.

The reader sent us this exceptionally cool photo of the caterpillars: 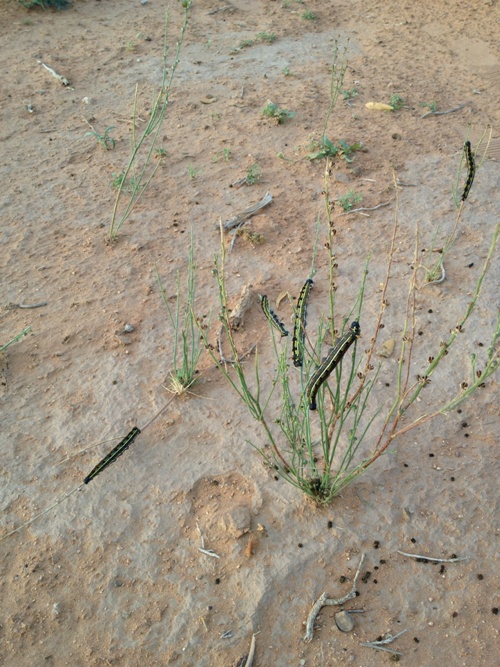 A charming story accompanied this photo. The reader was evidently out enjoying a picnic, or at least we were told that the place these caterpillars were found was “a wonderful place to have a picnic in,” when he found a large number of the creatures pictured above feeding. The reader tried to pick up two “worms” to give to his youngest sister, although they resisted. He did manage to capture a couple and take them home, however. That same night, the creatures got out of their jar and “ran away,” but they didn’t get very far. The reader’s sister tried to get the caterpillars back in the jar, but they resisted to an unusual extent, with the larger one going so far as to open its mouth and even spit. As a consequence, the reader decided to keep the caterpillars outside for the rest of the night. Probably a good decision.

As we’ve been implying all along, we think our reader found some type of caterpillar (i.e., the larval form of a moth or butterfly), and not a worm. So, what kind of caterpillar did he find? This is where things get tricky. There are tens of thousands of different caterpillars in the world, making it extremely difficult to identify them, even with all the excellent information our reader supplied. So, our basic answer to our reader’s question is simply this: “we don’t know.”

However, in our research we did come across a caterpillar that shares many of the physical characteristics with the one pictured above. It’s called the Bedstraw Hawkmoth caterpillar, which also goes by the name Gallium Sphinx caterpillar (the scientific name of the moth is Hyles gallii). They are found in many parts of the world, but no mention is specifically made (in what we read) to caterpillar being found in the Middle East. It is, however, found all over Europe, some parts of which are, globally speaking, not particularly far from Saudi Arabia. Bedstraw Hawkmoth caterpillars tend to be a green or bluish color, and their heads are often black. They also have a horn on their tails that is red, and they have ten eye-like spots along their bodies that are yellow. As great as the picture the reader sent us is, it’s hard to tell if this physical description precisely matches that of the caterpillar our reader found. It seems close, but there are some slight differences. For example, the spots on the caterpillars in the picture aren’t yellow (although there do appear to be ten of them, at least on a couple of the caterpillars, and moreover the spots are outlined in yellow). If our reader searches for images of Bedstraw Hawkmoth caterpillars, he should find creatures that look a lot like the ones he found. (Their appearance varies, however.)

If our reader did in fact find a Bedstraw Hawkmoth caterpillar, we were unable to determine if this particular caterpillar is poisonous, although most caterpillars aren’t. They can irritate human skin when you touch them, but that is generally the only damage they cause. What about the fact that the caterpillar opened its mouth and spit? This is actually a fairly common defense mechanism employed by many caterpillars. To startle predators, a caterpillar will discharge regurgitated fluid from its digestive system. Most people who raise moth or butterfly larvae are all too familiar with this tendency, as they often end up with this “spit,” which tends to be green, on their fingers after handling the caterpillars. This digestive fluid doesn’t cause any problems for humans, though, at least not in general.

Unfortunately, we can’t be sure what kind of caterpillar our reader found, but the Bedstraw Hawkmoth caterpillar is a reasonable guess. We invite readers to leave suggestions in the comments below to help our reader identify the very interesting creature he found.