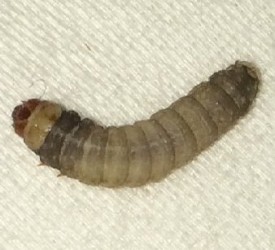 A reader in Arizona wrote to us about a black and gray larva that crawled into her bed and bit her on the hand. Naturally, this concerned her, and she is trying to figure out what she found. The larva, which is about a half an inch (one centimeter) in length, was a bit menacing in that even after the reader removed it from her hand, it started crawling back toward her, and it was only when she shined light on that it backed away. What type of black and gray larvae might crawl into your bed and bite you?

We’ll begin with the excellent photo the reader submitted:

With our initial thought nullified by the details, we are struggling to come up with another possible ID, and a lot of this has to do with the larva’s combination of characteristics – what it looks like and how it behaves. In the hundreds of questions we’ve answered about larvae – many of which look similar to the creature pictured above – we’ve never heard of any acting quite so aggressively toward a human. The larva in this instance crawled into the reader’s bed, where she presumably presented no threat, and bit her, and then it came back for more when she brushed it away. Most larvae and insects try to avoid confrontation.

So, we are basically at a loss, but we can still offer a couple of speculative thoughts. One, the larva looks a bit like a grub worm, which in the broadest terms is just a beetle larvae, but it is often more specifically used to denote the larval form of scarab beetles. Grubs worms, which have thoracic legs, are primarily known as lawn pests, but we know that some species have small pinchers. These are used to attack the roots of plants, and for all we know they aren’t ever used against humans, but we suppose it’s possible. Most grub worms are white or off-white in color, so the creature above doesn’t look exactly like a grub, but we do think this is a possibility. Our only other thought was that our reader found the larval form of an adult insect that is more aggressive, like a wasp or hornet. However, the larval forms of both of these insects appear to be white and quite small, and we can’t find any reports of people being attacked by these larvae.

Unfortunately, then, we must conclude with uncertainty. Our reader doesn’t appear to have found a particularly uncommon larvae – it looks similar to many we have seen – but its behavior is strange, wo we can’t offer a definitive identification. However, maybe we have at least given our reader some ideas that she can use for further research.

Article Name
Black and Gray Larvae that Bite
Description
A reader in Arizona wrote to us about a black and gray larva that crawled into her bed and bit her on the hand.
Share the knowledge

2 thoughts on “Black and Gray Larvae that Bite”