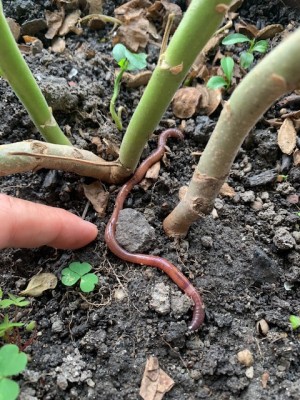 “I rescued this guy from my toilet in a 4th floor apartment,” says this US resident about the worm she found during her visit to Nepal. The organism in the photograph appears to be mostly beige in color, with brown and pink accents along its body, has a segmented, elongated body, and is quite long in relation to our reader’s fingers. 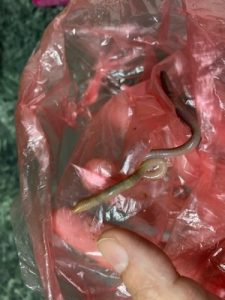 Upon discovering the worm, our reader put it in a potted plant and waited for half an hour to see if the worm would show any interest in the soil. Thirty minutes later, the worm seemed to show no interest in the soil. Our reader wonders if she needs to “race to the doctor’s” or if there is “another more logical explanation” for this worm showing up in her toilet. She adds that there is only one apartment above hers, the pipes are plastic and that she rarely has flies in her apartment.

Firstly, we want to assure our reader that this worm most definitely did not come from her body. Not only is it far too large to be a parasite (besides the tapeworm, which this obviously is not, most parasites are extremely small or even microscopic), but our reader would have known if it came from her body, as it would have been covered in faeces upon exiting her body. We apologize for the crude explanation, but it is best not to beat around the bush.

Secondly, it is clear to us that this organism is not a parasite, because it is definitely an earthworm. While the clitellum on this earthworm (the thicker band of skin the encircles an earthworm’s body) is either obscured by the stray piece of plastic that is folded over its body, or by the earthworm’s own body (which has sort of twisted in on itself) in the photo above, it is visible in the second photograph near the end of its ‘tail’. Additionally, we think this is an earthworm because of the worm’s body shape, coloration, segmentation and location of discovery. Strangely enough, it is not uncommon to find an earthworm in one’s toilet. Usually this is because there is a crack in the sewage pipe somewhere underground where an earthworm would be able to access it. As our reader’s pipes are made of plastic, this is highly likely. Earthworms might likewise be attracted to crawling up the sewage pipe to begin with because animal faeces form a part of the earthworm’s diet, of which there are plenty in sewage pipes. 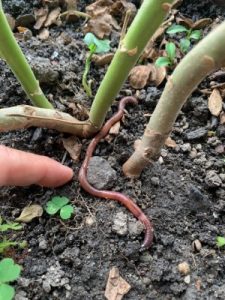 Thirdly, although earthworms are famous for their contribution to the ecosystem through their excretion of nutrient rich, natural fertilizer, there is a reason for why it did not take to our reader’s potted plant. The main reason is because, as an ecosystem, the soil of a potted plant does not offer favorable living conditions for an earthworm. Not only is there not nearly enough decaying organic matter for it to feed off long term, but there is no potential for mating either. If we think about it, it is far more common for people to find an earthworm in their toilet than in their houseplant.

Lastly, the fact that our reader’s apartment rarely has flies likely has little to do with the appearance of this worm. Fly larvae, better known as maggots, are far tinier, white in color and usually stick to compost bins and other places where there is rotting food. Their presence, or lack thereof, would not attract earthworms in any way. As both of these animals are on the same level of the food chain, and neither of them are predatory, they tend to have little to do with each other.

To conclude, the worm our reader found in her apartment’s toilet in Nepal is just an earthworm! These creatures pose no threat at all, both in terms of human health and in terms of infesting an urban space. All our reader needs to do is move the earthworm outside and she will be good as gold! We also wish to note that our reader did pose a follow up question about a different critter in her submission that we will be getting to in the next article.

Article Name
Beige-Pink Worm Found in Toilet in Nepal is an Earthworm
Description
"I rescued this guy from my toilet in a 4th floor apartment," says this US resident about the worm she found during her visit to Nepal. The organism in the photograph appears to be mostly beige in color, with brown and pink accents along its body, has a segmented, elongated body, and is quite long in relation to our reader's fingers.
Author
Worm Researcher Anton
Share the knowledge

People helped by this info: 747