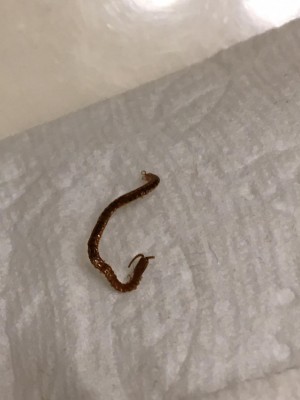 A reader recently reached out to us from Canton, Ohio. She explained that she found two specimens in her bathroom. The one she found in the toilet was alive, and the one she found on the ground in front of the toilet was dead. She said she did a spring bug spray 2 days ago. She would like to know what the creatures are. This is the picture she shared with us: 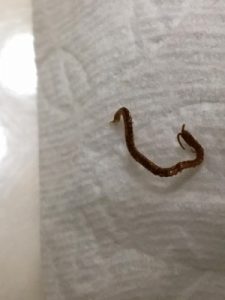 Based on the gnarled appearance of this specimen, we think it might be the dead one. It appears to have a brown, segmented body and two antennae. We are confident that this is either a millipede or a centipede. Millipedes and centipedes are both arthropods that look quite similar. Both have segmented bodies, antennae, and lots of tiny legs. Millipedes are typically rounder, and they have 2 pairs of jointed legs per body segment. Centipedes have flatter bodies, and have only 1 pair of jointed legs per body segment. Since we cannot see the legs of the specimen in this photograph, we aren’t exactly sure if it is a centipede or a millipede.

Both centipedes and millipedes appear in reader’s homes and bathrooms fairly often. They both like damp, dark environments, and a bathroom often provides the humidity that they desire. We don’t often hear about them swimming in toilets, and neither typically live submerged in water, so we can’t explain why the creature was in the toilet. Our reader mentioned that she recently sprayed her home, so this could explain why these creatures suddenly turned up. To keep her home bug-free, we recommend that she clean her home often to eliminate debris, and make sure all the windows and doors in her house are properly sealed to prevent small guests from crawling in.

In summary, one of our readers discovered two creatures in her bathroom. We believe the creatures are either centipedes or millipedes, but we couldn’t figure out which they were based on the photograph alone.

Article Name
Arthropods Discovered Near Toilet
Description
One of our readers discovered two creatures in her bathroom. We believe the creatures are either centipedes or millipedes, but we couldn't figure out which they were based on the photograph alone.
Author
Dori Franklin
Comments: 0 Posted by: Worm Researcher Dori Categories: Centipedes and Millipedes