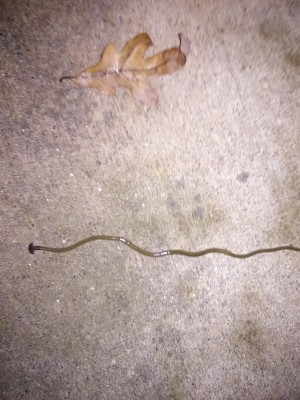 June 10, 2018
One of our readers has been discovering some worm-like organisms in his yard occasionally over the course of several years. He is pretty sure that the specimens are hammerhead worms, but hopes that we are able to confirm this. He wants to know if hammerhead worms are considered to be pests, and if they are pests, then how he can go about getting rid of them. 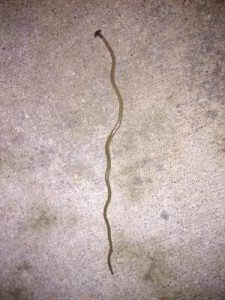 What an excellent photograph! We agree with our reader, he is dealing with hammerhead worms! Hammerhead worms are predatory terrestrial flatworms that are nicknamed for the distinctive shape of their head region. Since there are numerous species of hammerhead worms, the name is used to describe a number of similar worms that belong to the Bipalium genus.

As we mentioned, these worms are predatory, but they aren’t as dangerous as they sound. They aren’t harmful to humans, dogs, cats, or other pets. The only creatures that suffer directly because of hammerhead worms are earthworms, which are the primary food source of these flatworms. Hammerhead worms have an extremely gruesome way of eating their prey. First, a hammerhead worm will follow the trail that an earthworm leaves behind to locate it. Once it finds the unlucky earthworm, it holds its victim in place with its muscles and a sticky secretion. The hammerhead worm then secretes enzymes on the earthworm that dissolve its body. Finally, the hammerhead worm sucks this liquified feast up! Yuck!

Although hammerhead worms aren’t generally considered to be pests, some people do see them in that light. They feed on earthworms, which are extremely beneficial to the environment. Earthworms help control pest populations, like termites and grubs, and they help keep the soil nutrient-rich. So, by killing earthworms, hammerhead worms might cause your garden or yard to suffer slightly. We don’t think our reader needs to go out of his way to rid his yard of hammerhead worms, but if he is determined to eliminate them, we will offer a few tips. First, hammerhead worms will regenerate if cut up. So our reader should not attempt to slice these worms into pieces because the pieces will just become additional hammerhead worms! Effective treatment options include using salt, vinegar, or citrus oil to dissolve the worms. Our reader can use a spray bottle filled with either vinegar or citrus oil to directly spray the worms, or pour salt directly on them. Just spraying the soil or spreading salt on it will not do the trick.

To conclude, a reader asked us about some hammerhead worms he found in his yard. We have offered a few options for getting rid of these flatworms. Happy hammerhead worm hunting!

Article Name
Are Hammerhead Worms Pests?
Description
A reader asked us about some hammerhead worms he found in his yard. We have offered a few options for getting rid of these flatworms. Happy hammerhead worm hunting!
Author
Dori Franklin
Comments: 2 Posted by: Worm Researcher Dori Categories: Flatworm, Hammerhead Worm