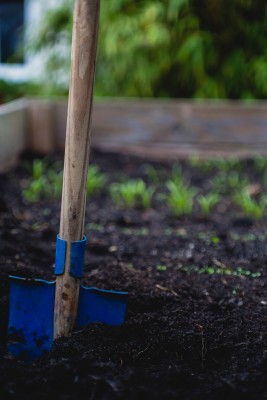 Share the knowledge
Worm tea sounds like a disgusting beverage, not exactly the sort of drink you want to curl up with on a cold night (or any night for that matter.) Fortunately, it’s not a drink that people enjoy…it’s used primarily as a fertilizer!
How It’s Made

The material components of worm tea are worm castings (a.k.a. frass or worm feces), which you can get from your vermicompost, and water. Given that worm tea only consists of two ingredients, it makes sense that it’s relatively easy to make.

First, fill a bucket about three-quarters full with water. If you want to get fancy, you can allow the water to aerate for roughly two hours using an aquarium air pump, which will remove all chlorine from the water. If you don’t have an air pump, you can skip this step. Next, add three to five scoops (or handfuls) of worm castings and about an ounce of unsulfured molasses to the water, which will serve as bacteria food, facilitating the creation of good bacteria. Stir the worm castings, molasses, and water and let the mixture sit for 24 hours. If you do have an aquarium air pump, we recommend letting it run the entire time to continue to aerate the mixture. Come back to the bucket in a day, strain the concoction, and you’ve got worm tea!

What It’s Used For

Now you have a bucket of worm tea, what do you do with it? In essence, worm tea is used for gardening and lawn upkeep. Worm tea is loaded with helpful microorganisms and other nutrients that plants and soil need to kill disease and harmful insects, and it’s able to do this without harming your plants. Worm tea is like vitamins for plants – it boosts the plant’s immune system.

Since worm tea has bacteria in it that is alive, it’s best to use it as soon as possible. (If it starts to smell bad, it has gone bad and should be discarded.)  In light of this, it’s best to make sure you have time to spray your plants and/or lawn with worm tea soon after you’ve created it. This may influence the time of the day at which you start to make worm tea. If you start making worm tea late at night for some reason, you could be setting yourself up for midnight gardening.

If you don’t have the time to make worm tea, you can always buy some! It is sold in Home & Garden stores and online! We wish all of our readers happy gardening!

Article Name
All About Worm Tea - What's It For? How's It Made?
Description
Worm tea sounds like a disgusting beverage, not exactly the sort of drink you want to curl up with on a cold night (or any night for that matter.) Fortunately, it's not a drink that people enjoy...it's used primarily as a fertilizer!
Author
Dori Franklin
Share the knowledge

This many people searched for this info: 936