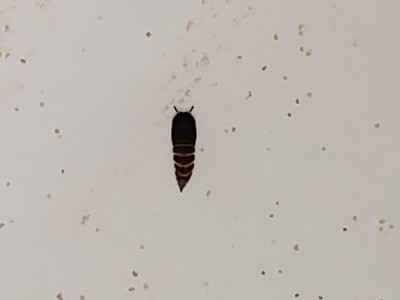 A reader of ours found two worm-like creatures in a toilet at an Air BnB and wonders if we have any thoughts as to what they might be. The creatures in question appear to be black and white in coloration, with a segmented body striped black and white, a sharply-pointed tail, and a bulkier head sprouting two antennae. 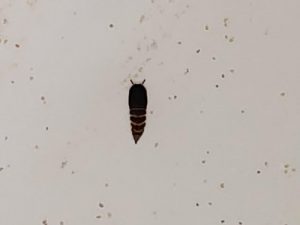 Our reader specifies that the creature is as long as a fingernail and wriggles slowly. Additionally, the part of the creature without the antennae “elongates about 50% when moving”, which we believe is what this second image that our reader captured demonstrates. We want to thank our reader for providing such high-quality images. Thanks to these images, we were able to conclude that these creatures are drain fly pupae. 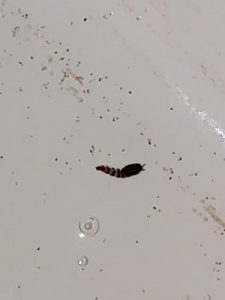 Drain flies are common pests that infest people’s bathrooms and kitchens. Communities of drain flies will congregate in sewage systems to mate on the slimy films that form in drains. They gather here because their primary source of food is decomposing organic matter. A drain fly mother will lay its eggs in any spot where nutrient-rich organic matter is present, so that the larvae can start feeding immediately. The larvae tend to be black, and barely 2/5-inch, while the adult flies are often mistaken for moths given the shape of their bodies and wings, as well as their brown/gray coloration.

Given their diets, when drain flies do appear in people’s sinks, toilets, or bathtubs/showers, it is an indicator of a build-up of organic matter in the drain, meaning that one should be cleaning out their drains more often. However, despite the fact that drain flies live in sewage, they do not carry any disease. That being said, if infestations are discovered, they should be eradicated as soon as possible, as they still carry a lot of bacteria after having walked around in sewage. But of course, as our reader was living in an AirBnB, this will not be a concern for them.

Now, with respect to the drain fly pupae, there is actually not much information on them. It is peculiar that our reader saw them move, as the pupae of most species of insects will remain immobile during pupation. One source does indicate that both the larvae and pupae use breathing tubs which they extend to the surface of whatever body of water they may reside in, but does not necessarily imply that the pupae are active and move about. 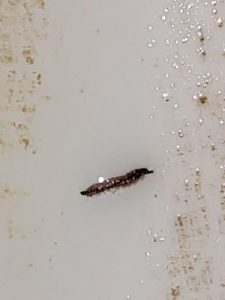 To conclude, the creatures our reader found were the pupae of drain flies. Their shape, antennae and segmentation, as well as the location in which they were discovered yields this conclusion. Drain flies are not dangerous, so our readers have nothing to fear from this discovery. And so, we hope this article was interest and proved helpful to our reader!

Article Name
Air BnB Guest Find Two Drain Fly Pupae in the Toilet
Description
A reader of ours found two worm-like creatures in a toilet at an Air BnB and wonders if we have any thoughts as to what they might be. The creatures in question appear to be black and white in coloration, with a segmented body striped black and white, a sharply-pointed tail, and a bulkier head sprouting two antennae.
Author
Worm Researcher Anton
Comments: 0 Posted by: All About Worms Categories: Drain Fly Larvae, Marine Worms