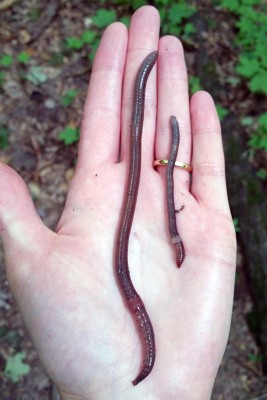 Although most would argue that no species of worm is wanted in the home, there are some that are particularly scary to find in your home. This article will provide some examples of worms which would be a nightmare to find in your home, which we hope none of our readers will discover in their own homes.

First and foremost, it should be noted that this article will not take into account the actual possibility of finding these worms in your home, but is merely meant to be an entertaining look at some worms that we are positive would scare the living daylights out of someone if they stumbled upon any of them. Secondly, as this article is meant for pure entertainment, we will neither be providing advice on how to get rid of these worms were you to find them in your home, which is extremely unlikely.

Let us start with the mildest of the worms, the jumping worm. These worms are fairly plain in sight, being earthworms, but it is their trademark behavior that makes this little critter so frightening. Jumping worms get their name from the behavior they exhibit when they feel threatened. When provoked, a jumping worm will go into a frenzy, writhing violently and rapidly in an attempt to get away from what it assumes is a predator. If you try to catch one of these worms, they might even sever off a piece of their own tail to escape! The most disturbing part of this is that their tails will keep wriggling after they detach from their bodies. There are several species of jumping worms, and as an invasive animal, they are considered threatening to forest ecosystems as the rate at which they decompose leaf-litter, as well as they way they decompose it, robs the trees of vital nutrients they would have gotten from the leaf litter. Although unlikely, imagine finding a group of these writhing worms in your home, bouncing around wildly while leaving bits of their tails everywhere! The sight would be utterly horrifying. 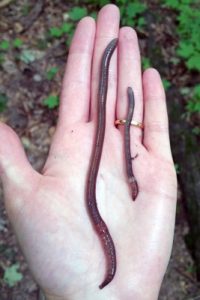 While the jumping worm is frightening primarily because of it’s shocking and unexpected behavior, our next worm is truly frightening because of how it can affect humans. If you are squeamish, you may want to stop reading now.

Moving on, the next worm we will be looking at is the New World Screwworm. Although this parasite is not necessarily one you would find crawling about your home (though it is not impossible), it is one that can affect humans and has been found hosted inwhich can grow up to 10 feet in length, and sports five antennae humans before. New World Screwworms are native to the Central and South Americas, and usually measure up to 2-centimeters in length, making this quite a large parasite. What sets this worm apart from other worm parasites is that it does not infest the intestines, but rather any part of the human body. The mature flies of the New World Screwworm enter the body at any point where there is an open wound to lay their eggs. Upon entering the body, the eggs only need a maximum of 15 hours before hatching. Thereupon, the larvae can cause intense pain and irritations of the skin. One case of a New World Screwworm infestation saw these critters being pulled from the scalp of a young girl! So, you definitely would not want to the find the adult flies of one of these worms in your home if you had any open wounds! 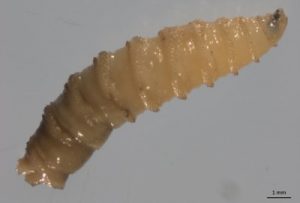 Lastly, we come to a worm that you would definitely not find in your home, mainly because it is a marine worm. The monstrous bobbit worm is a creature we have covered before, but is definitely worth mentioning again. This worm, which can grow up to 10 feet in length, and sports five antennae, is like a creature out of legend. This deceptive critter rests on the ocean floor of tropical oceans, only sticking out a fraction of its body before propelling itself forward to kill its prey. It is said that the bobbit worm’s jaw is so strong that it can cut some fish clean in half! Although the behaviors of this worm are quite well understood, there is still much to be learned about this fantastic creature, and experts are still unsure as to what to classify it as, though generally it is regarded as a polychaete/bristle worm, which is an order of invertebrate marine worms that tend to possess some form of venom. We are sure that finding these in one’s home, though unlikely as it is, would bring a terror equivalent to that of discovering a giant python in one’s home (which has happened on occasion).

To conclude, this has been a short, albeit frightening guide to some of the worms that we think would be terrifying to find in one’s home, hypothetically speaking. We hope that this somewhat offbeat, ‘what-if’ article has been entertaining for our readers during these trying times, and that everyone stays healthy, safe and cozy!

Article Name
3 Worms Which Would be Terrifying to Find in Your Home
Description
Although most would argue that no species of worm is wanted in the home, there are some that are particularly scary to find in your home. This article will provide some examples of worms which would be a nightmare to find in your home, which we hope none of our readers will discover in their own homes.
Author
Worm Researcher Anton
Share the knowledge